Reaper Financial and RPR Token serve the digital ecosystem as a natural market regulation tool for a decentralized economy. By unleashing the natural aspect of death upon an artificially created universe we serve to preserve the value of every entity within. While digital economies are known for their volatility, The Reaper seeks to remove the excess and unvalued assets in order to prevent violent market swings. Reaper Financial accomplishes this mission through a decentralized voting mechanism in which the value of RPR is used to purchase and destroy the undervalued assets.

Because all assets destroyed are purchased at market value, no investors are damaged in the process of a Reaping; only those projects whose reputation and credibility warrants reaping are eligible as a means of protecting all parties involved. Reaper Financial is a responsible partner of the community of which we are a part and will at no time take action that is not for the betterment of the community at large. As members of the XRP Ledger, we are a carbon neutral and environmentally considerate solution to excess both in the digital universe and the tactile facsimile in which we live.

A 15-year Combat Medic Veteran, Patrick has a proven track record of service, commitment and leadership. As a Platoon Sergeant and Non-Commissioned Officer-in-Charge Patrick has led large-scale, joint task force, multi-disciplinary operations. He has worked and negotiated with high level foreign governments officials concerning their nation’s healthcare and defensive capabilities. His breadth of knowledge and experience gives him a unique vision to lead The Reaper.

Jason Cooper is the CTO and Owner of a web design company. Jason has over 15 years of experience in web development, web design, and online marketing. He has built and launched various successful online services with a focus on the financial sector. His wide breadth of knowledge in coding languages, marketing, business, and strategic partnership development gives him a unique edge making him a perfect fit to develop The Reaper.

Sam Wagner is the CEO/CFO and Co-Owner of a successful commercial credit repair company. Sam has over 20 years of experience in consumer and business credit analysis in the financial services industry. Sam worked as a Regional Marketing Director for Global Equity Lending and Oakstreet Mortgage for a combined decade. Sam has experience as a licensed business insurance and securities manager. He has an advanced understanding of algorithms and pattern recognition. Mr. Wagner’s experience in all facets of business finance, insurance, banking and risk management make him and ideal candidate to the be Chief Financial Officer of Reaper Financial.

Ian is an accomplished leader with extensive international experience in directing sales, marketing operations, developing integrated sales/marketing/rewards and strategies within a fast-growing Business-to-Business market environment. Ian is globally mature being originally from Tasmania and now living in the UK. He has lived and worked in 8 countries where he applied his skills in building teams and implementing alternate currencies within business communities. Ian’s enthusiasm for business and his depth of experience will be a great asset to The Reaper.

Fred Rispoli is an attorney whose life-long passion is advocating for personal justice and freedom. Fred has years of legal experience litigating high-stakes class action lawsuits for one of the largest global law first before he founded his own practice to help those injured by neglect in assisted living situations. Fred’s love of person freedom led him to the digital asset space in 2018 and Fred has assisted individuals and businesses in digital asset procurement, custody and regulatory compliance. Prior to becoming an attorney, Fred served as a science teacher in a distressed urban school district.

The Board Of Advisors

Chairman Of The Board

Chairman Of The Board

Shawn is the sitting Chief Information Officer of the State of North Dakota, appointed by Governor Doug Burgum. Shawn previously served in leadership positions for Mayo Clinic and IBM. His career has included massive change and transformation initiatives spanning multi-billion-dollar organizations in roles as Chief Information Officer, Chief Technology Officer, and Information Management Officer. He has a passion for IOT and is working on space-age technological developments for his State. Shawn is always looking to connect with others who have a “we can change the world” attitude as he strives to be a servant leader, improve lives, empower people, and inspire success.

Dorman is the Principal Consultant of North American Data-Strategy for Capgemini and former Chief Data Officer for the State of North Dakota. His primary professional focus is integration of sustainability into consumer products and telecom industries. Dorman is also a writer and regularly invited to speak as an expert on Data Analytics, Automation, and Artificial Intelligence. He has been featured in articles on Forbes, RTInsights, and The Brookings Institute. Dorman is committed to the betterment of humanity through the application of his knowledge and experience.

Fadi Fadhil serves as the Chief Technology Officer of Palo Alto Networks, the top Cybersecurity Company in the World. Educated at the Baghdad University of Technology, Fadi narrowly evaded execution for refusing allegiance to Dictator Saddam Hussein; choosing then to serve alongside American Forces as an interpreter. After receiving a visa to the United States, he was selected to attend MIT’s executive program for development of Leading-Edge Operations Strategy in 2014. Fadi now holds over a dozen internationally accredited certifications in IT leadership and IT Service Management. Fadi formerly served as CIO for the city of Minneapolis, CIO for Minneapolis Public Schools, and spent more than 20 years in K-12 Education with various other cybersecurity roles supporting a network of thirty-five thousand students.

Mary Lou Prevost is an organizational transformation agent and visionary leader. She has an entrepreneurial spirit being brought in to establish new government & education focused verticals at multiple companies. She is currently Vice President of Splunk’s State, Local Government and Education business group for the United States. Splunk is the leader in the SIEM market with an extensible data platform powering unified security and full stack observability. She is no stranger to Cyber Security industry previously serving as Area Vice President for Palo Alto Networks and Vice President for CA’s public sector network security business including identity and API management. She brings a unique blend of tech acumen and government experience.

RT @RealReaperCEO: Know that you don't know.But you will... https://t.co/8gMKUzVdOf 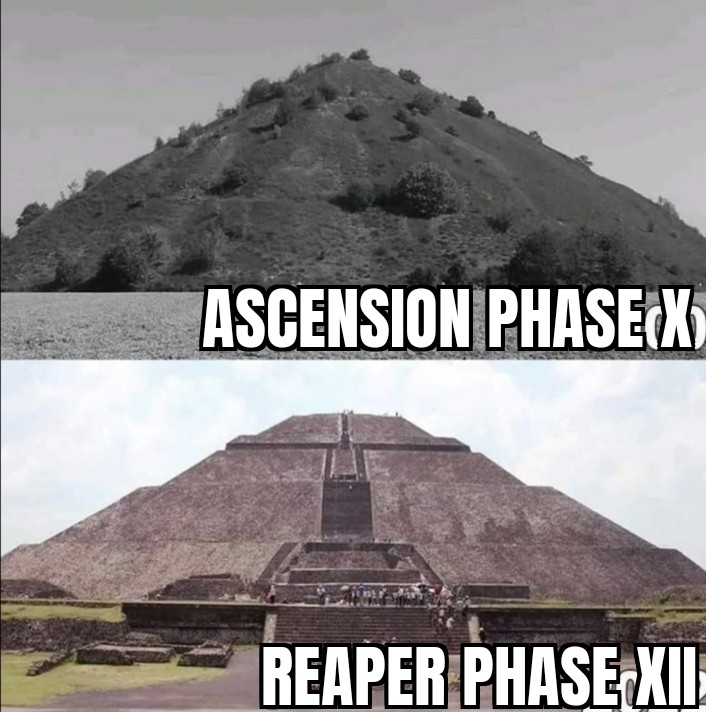 RT @RealReaperCEO: To those who just read the ASC whitepaper and thought to themselves 'that's a nice dream' here is a few educational vide…

RT @ClimberX13: Oh my. Be still my staking heart. I do believe this is what ED medicine is made of. If you hold #BTC, #eth or any other L1…

We proudly present the Ascension V2 White Paper and Vision for Phase I - Phase Xhttps://t.co/8FMLY7FJHB

RT @RealReaperCEO: Big Problems have simple solutions, and sometimes that's simply a bigger problem. Too many people think that where we ar…

The Seventh Circle of Marshal NFT's was true to it's name 'Violence', it Sold Out faster than we could post that th… https://t.co/JFJD4FYLkk

RT @BetterParties: Premiering in about 15 minutes, this will be fascinating, something new and different! From @DubzKhaos, with @WithChari…

RT @SpenceRPR_: Question for #XRPHoldersIf there was a project you could buy into that reduces the supply of xrp, would you? #XRP #XRPL #X…

RT @BetterParties: @Cointelegraph I've been in crypto for almost 3 years, I've been part of several active groups all along, but I've never… 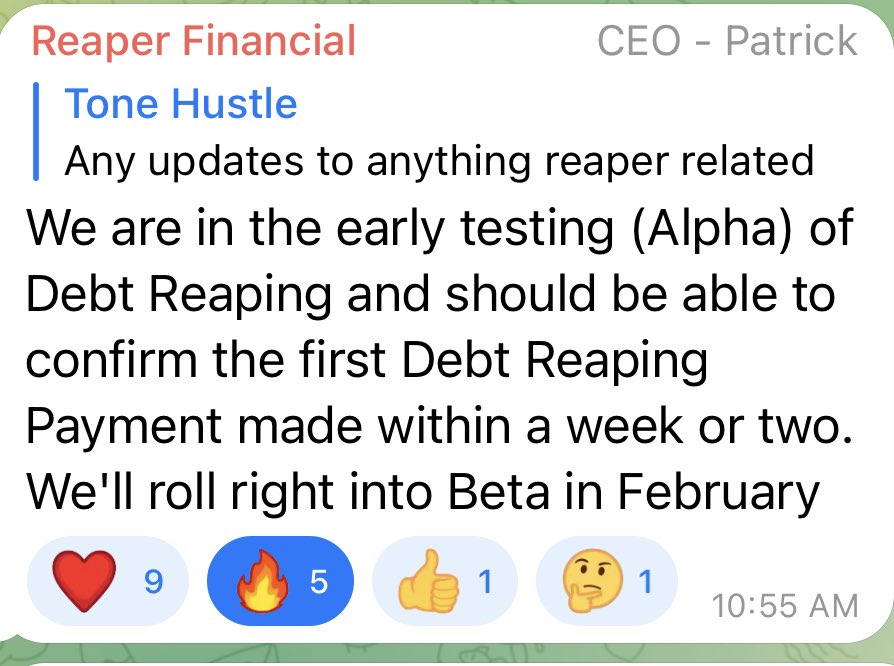 RT @JohnEDeaton1: Just finished speaking on the record with the judge in court. Court is not over. Check in at 6pm. The judge and I talked…

RT @attorneyjeremy1: First word from the SEC v. LBRY hearing:The SEC admitted on the record that the token itself is not a security.Goo…

RT @XRPjenna: 📣 XRPL TOWNHALL 🍻Sunday, 4pm ESTCome hang out at, join the chat or hop in the live stream with us! Set your reminder! 👇…

Reaper Financial and RPR Token serve the digital ecosystem as a natural market regulation tool for a decentralized economy. By unleashing the natural aspect of death upon an artificially created universe we serve to preserve the value of every entity within.

Disclosure: Digital assets are subject to a number of risks, including price volatility. Transacting in digital assets could result in significant losses and may not be suitable for some consumers. Digital asset markets and exchanges are not regulated with the same controls or customer protections available with other forms of financial products and are subject to an evolving regulatory environment. Digital assets do not typically have legal tender status and are not covered by deposit protection insurance. The past performance of a digital asset is not a guide to future performance, nor is it a reliable indicator of future results or performance. Additional disclosures can be found on the Privacy Policy and Terms and Conditions.